Q01 How will you go about identifying duplicate records in a table?
A01 This is a very popular interview question because there are many approaches, hence when you provide a solution the interviewer can drill further to assess your understanding on uses of DISTINCT, GROUP BY, WINDOW function, Common Table Expression (i.e. CTEs), etc.

Setup the data on db-fiddle to practice.

Show me the data:

OUTPUT: Shows records that have more than 1 occurrence.

Note: Interviewer is testing if you understand that the aggregate queries need to have a “GROUP BY” clause on columns that are NOT aggregated. E.g. NAME, DESIGNATION and DOB.

Q02 How would you go about deleting the duplicate records?
A02 You could do it in a number of steps as shown below.

Example based on MySQL 8.0.

Example based on Teradata. ROW_NUMBER() is a window function that assigns a sequential integer to each row within the PARTITION BY of a result set. In the below example, the rows are partitioned by name, designation, and dob. QUALIFY is like a WHERE clause for windowed records, and will filter out any duplicated records. Learn more in detail at SQL window function for analytics & qualify interview Q&As.

Example based on Teradata, which has the QUALIFY

Using the GROUP BY & MAX() without using CTE and ROW_NUMBER().

DT is an alias for a Derived Table. The alias can be anything other than DT. It could be x. Use derived tables when you are required to perform some complex query and result of inner query work as table for outer query. Derived tables are created on the fly with the help of a Select statement. The scope of derived table is limited to the outer Select query who created it. Derived table can’t be used further outside the scope of outer select query.

So, you have CTEs, derived tables, subqueries & temp tables to be used in different scenarios at your disposal. Some databases provide PIVOT & UNPIVOT functions, but let’s use SQL to achieve this. Let’s use DB Fiddle to practice SQL using MySQL V8.0 as depicted below.

PIVOTing is also known as transposing rows to columns. The CASE statements & aggregate function SUM with GROUP BY to the rescue as shown below.

Let’s create a PIVOTED table so that we can UNPIVOT in the next step. CTAS is a parallel operation that creates a new table based on the output of a SELECT statement.

CTAS is a more customizable version of the SELECT…INTO statement. For example:

CTAS is more powerful as you can specify both the distribution of the table data as well as the table structure type.

The UNION ALL statementsto the rescue. Use of PIVOT function

A typical example would be to display the sales data for Quarter 1 to 4. The below is a Teradata PIVOT function. 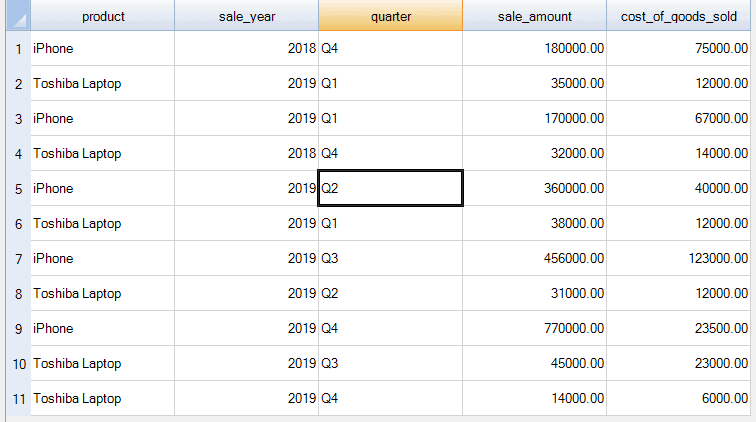 The above table can be created for demo purpose using a VOLATILE TABLE, which is an in memory table in teradata:

Use the PIVOT function

Below question is very popular in SQL interviews:

Q: Given the below table with win versus loss between 2 teams, how will you create a points table with played, won & lost?

A: Let’s create the data first.

CASE statement helps you evaluate the win in numeric term as in 1 for win & 0 for a loss. Union all is required to get both team_1 & team_2 names. Aggregation as in sum(..) & count() with group by is required to display the final results.

Q: What if you have a draw shown as a null in the “who_won” column?

A: We can add another CASE statement to represent a draw.

Q: What is a null safe join?
A: A join displays only the rows that have a match in both joined tables. Columns containing NULL do not match any values when you are creating an inner join and are therefore excluded from the result set. Null values do not match other null values.

One option is to make your join column as NOT NULL and set some default value so that it won’t have null values. Another option is to create a new column that will act as a surrogate key to join on instead.

What if the tables are already created & you can only make changes in the queries?

The above scalar functions can impact performance. Another approach is to have a null check as shown below:

Finally, some database servers provide a NULL safe equality operator like <=>. For example, in Apache Spark