Q1. What is the difference between “ExecutorService” and “Fork/Join Framework“?
A1. The Fork/Join framework uses a special kind of thread pool known as the ForkJoinPool, which is a specialized implementation of ExecutorService implementing the 1) work-stealing algorithm, in which the idle workers steal the work from those workers who are busy. This can give better performance. 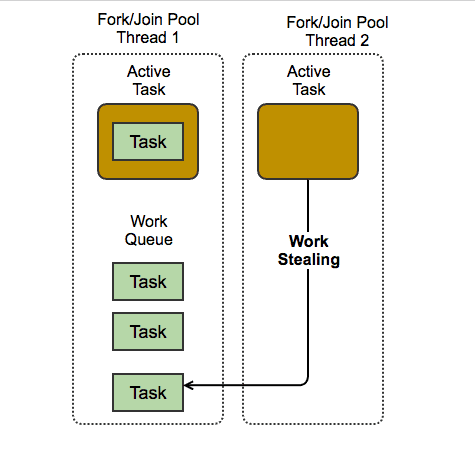 The Fork-Join breaks the task at hand into mini-tasks until the mini-task is simple enough that it can be solved without further breakups. The pseudo-code is like:

The actual working example can be found at Java multi-threading scenarios interview Q&A.

Another difference in ForkJoinPool compared to an ExecutorService is that, even though you specify an initial capacity, the

2) ForkJoinPool adjusts its pool size dynamically in an attempt to maintain enough active threads at any given point in time.

3) ForkJoinPool threads are all daemon threads, hence its pool does not have to be explicitly shutdown as we do for executor service “executorService.shutdown()”;

Q2. What do you understand by the term “asynchronous” processing?
A2. Asynchronous task means its processing returns before the task is finished, and generally causes some work to happen in the background before triggering some future action in the application to get the results or handle the exception via one of the following mechanisms:

Q3. Why was CompletableFuture class introduced in Java 8 to work with executor service when you already have “ForkJoinPool” that gives good performance?
A3. The use cases for the fork/join are pretty narrow. It can only be used when the following conditions are met.

1) The data-set is large & efficiently splittable.

2) The operations performed on individual data items should be reasonably independent of each other.

3) The operations should be expensive & CPU intensive.

When the above conditions do not hold, and your use case is more I/O or network intensive then use ExecutorService with CompletableFuture.

Q4. What is a Future interface, and why was it introduced in Java?
A4. The Future<V> represents the result of an asynchronous computation. The result is known as a future because the results will not be available until some moment in the future. You can invoke methods on the Future interface

1) Get the results by blocking indefinitely or for a timeout to elapse when the task hasn’t finished.

3) Determine if a task has been cancelled or completed.

The 3 variants of submitting a task to the ExeccutorService returns a Future object.

In Java 8, the Runnable & Callable interfaces are annotated with “@FunctionalInterface“. The major benefit of functional interface is that we can use lambda expressions to instantiate them and avoid using bulky anonymous class implementation.

Note: The “factorial” static function is explained at Top 6 tips to transforming your thinking from OOP to FP with examples

2) The “Future.get()” is a blocking call. Whereas, given a CompletableFuture “f” executing a task, you can both synchronously and asynchronously run another task as a callback upon completion of “f”.

If you need a result:

If you don’t need a result:

The same logic as above for “FutureExample” using a CompletableFuture object:

As shown below, new CompletionFuture objects can be created from another and also chained as demonstrated below at //1, //2, //3, and //4.

Q6. What is the difference between the calls thenAcceptAsync(…) and thenAccept(….)?
A6. In the above example, the thenAcceptAsync(…) are executed in a separate default thread pool known as the “ForkJoinPool.commonPool” and the order in which the lines “The result after square:” and “result after factorial: 120.0” vary between the runs. If you want to execute these two calls immediately after “pool-1-thread-1 factorial task is called” and “pool-1-thread-2 square task is called” in the same thread then use thenAccept(….), in the lines \\2 & \\4 which will give an output as shown below:

The output will be:

Now, if you want to run the “square task” synchronously in the same thread as “factorial task” then you need to make the following 2 changes as as shown to line //3.

2) Remove the second argument “newFixedThreadPool” as thenApply(..) only takes a task.

The output will be:

Q7. What is a task from the above examples that is passed to a CompletableFuture object?
A7. A task can be

2) A Consumer: that takes an object as an argument, but returns nothing. “CompletableFuture.thenAcceptAsync(Consumer)”.

3) A Function: That takes an object argument and returns an object result. “CompletableFuture.supplyAsync(Supplier)”. “Supplier” is a function that returns a value.

Q8. The CompletableFuture takes a task and optionally an executor service as arguments. What happens only if a task is supplied without an executor service?
A8. By default supplyAsync() uses ForkJoinPool.commonPool() thread pool shared between all CompletableFutures. This implicitly is a hard-coded thread pool that is completely outside of your control. So, you should always specify your own ExecutorService as shown in the above examples as in “newFixedThreadPool“.

Q9. What do you understand by the term reactive programming (RP)?
A9. The text book definition is that:

As we saw earlier in the CompletableFuture methods like supplyAsync(…), thenApplyAsync(….), thenCombineAsync(….), thenApply(), etc where you can join (i.e. chain) and combine CompletableFuture stages to build a pipeline of later running tasks. These tasks can run asynchronously and provide synchronization methods to join or combine split parallel tasks. This helps you to parallelize your code to make an application more reactive and responsive.