Q1. What do you understand by the terms Dependency Inversion Principle (DIP), Dependency Injection (DI) and Inversion of Control (IoC) container?
A1. The differences are very subtle and can be hard to understand. Hence, explained via code samples. 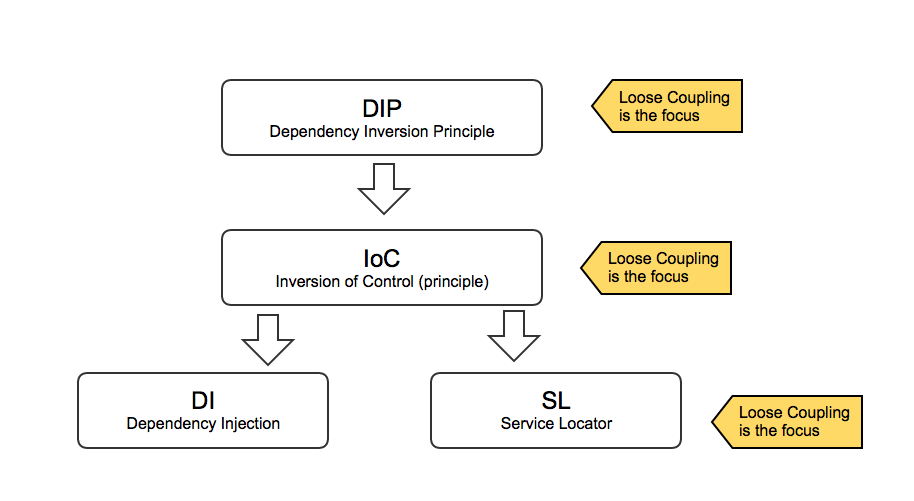 1) Dependency Inversion Principle (DIP): is one of the 5 OO design principles abbreviated as “SOLID”, and “D” stands for DIP meaning that we should always only rely on interfaces and not on their implementations. The idea of DIP is that higher layers of your application should not directly depend on lower layers. DIP is the principle that guides us towards DI pattern. You will see in the example below that the higher layer module “MyServiceImpl” depends on the lower layer module interface “Processor” and NOT on the implementations “XmlProcessor” & “JsonProcessor”. This is commented on the code shown in Q3 for “MyServiceImpl” as “// code to interface” for the understanding. 2) Dependency Injection (DI): is a design pattern where instead of having your objects create a dependency or asking a factory object to make one for you, you pass the needed dependencies into the constructor (i.e. Constructor Injection) or via setter methods (i.e. Setter Injection) from outside the class. This is achieved by defining the dependencies as interfaces, and then injecting in a concrete class implementing that interface via a constructor (i.e. constructor injection) or a setter method (i.e. setter injection) by wiring up via an IoC container like Spring. You can wire up the dependencies from outside using an XML config file as shown below:

or using annotations (i.e. preferred) as demonstrated with code in Q3. Dependency Injection is a design pattern that allows us to write loosely coupled code for better maintainability.

3) Inversion of Control (IoC): is a software design principle where the framework controls the program flow. Spring framework, Guice, etc are IoC containers that implement the IoC principle. An IoC container like Spring is responsibly for loosely wiring up the dependencies. When Spring application runs, it looks at the either XML config file or the annotations to wire up the dependencies. For example, in the example shown below Spring creates instances of XmlProcessor & JsonProcessor and inject them via a constructor into “MyServiceImpl“.

Q2. What are you “Inverting” in IoC?
A2. Flow of control is “inverted” by dependency injection because you are effectively delegating dependencies to some external system (e.g. IoC container like Spring or Service Locator).

Here is a DI example with Spring IoC container. We inject XML & JSON processors into “MyServiceImpl”.

Not a common IoC pattern. Very rarely used. Same code as above can be modified to use a Service Locator.

Modified “MyServiceImpl” to use the Service Locator

The key focus of both types of IoC is to loosely couple dependencies among components like MyApp, MyServiceImpl, and Procesor as per the above examples.

3) Interface Injection (e.g. Avalon): Injection is done through an interface.

Q5. Which ones are the most commonly used DIs?
A5. 1) Constructor Injection, 2) Setter Injection & 4) Field injection with annotations.

Q6. When will you favor DI type “Constructor Injection” over “Setter Injection”?
A6. Using constructor injection allows you to hide immutable fields from users of your class. Immutable classes don’t declare setter methods. This also enforces that you have the valid objects at the construction time. It also prompts you to rethink about your design when you have too many constructor parameters.

Q7. When will you favor DI type “Setter Injection” over “Constructor Injection”?
A7. In some scenarios, the constructors may get a lot of parameters, which force you to create a lot of overloaded constructors for every way the object might be created. In these scenarios setter injection can be favored over constructor injection, but having too many constructor parameters may be an indication of a bad design.