Q3. Can you describe what the following code does and what parts of memory the local variables, objects, and references to the objects occupy in Java?

A3. The above code outputs “Hello! John you are now 26”. The following diagram depicts how the different variable references & actual objects get stored. 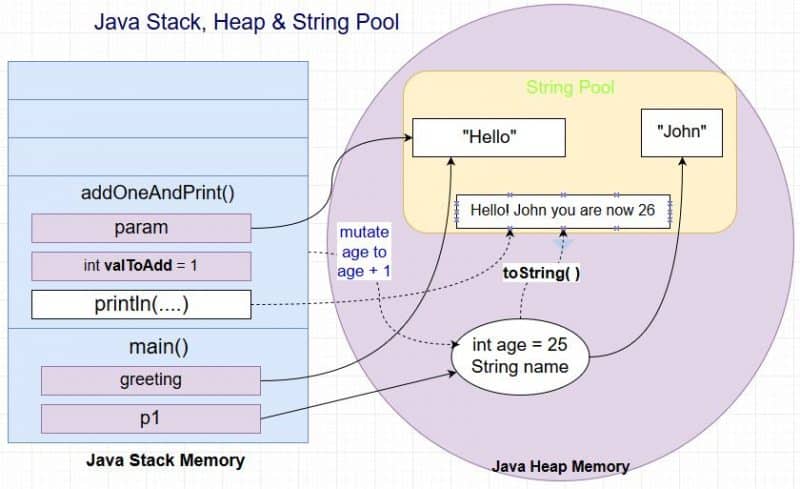 Stack: is where local variables both primitives like int, float, etc & references to objects in the heap and method parameters are stored as shown in the above diagram.

Heap: is where objects are stored. For example, an instance of “Person” with name=”John” and age=25. Strings will be stored in String Pool within the heap.

Q4. Why String class has been made immutable in Java?
A4. For performance & thread-safety.

1. Performance: Immutable objects are ideal for representing values of abstract data (i.e. value objects) types like numbers, enumerated types, etc. If you need a different value, create a different object. In Java, Integer, Long, Float, Character, BigInteger and BigDecimal are all immutable objects. Optimisation strategies like caching of hashcode, caching of objects, object pooling, etc can be easily applied to improve performance. If Strings were made mutable, string pooling would not be possible as changing the string with one reference will lead to the wrong value for the other references.

2. Thread safety as immutable objects are inherently thread safe as they cannot be modified once created. They can only be used as read only objects. They can easily be shared among multiple threads for better scalability.

Q. Why is a char array i.e char[] preferred over String to store a password?
A. String is immutable in Java and stored in the String pool. Once it is created it stays in the pool until garbage collected. This has greater risk of 1) someone producing a memory dump to find the password 2) the application inadvertently logging password as a readable string.

If you use a char[] instead, you can override it with some dummy values once done with it, and also logging the char[] like “[C@5829428e” is not as bad as logging it as String “password123”.

Q5. In Java, what purpose does the key words final, finally, and finalize fulfill?
A5. ‘final‘ makes a variable reference not changeable, makes a method not overridable, and makes a class not inheritable.

‘finalize‘ is called when an object is garbage collected. You rarely need to override it. It should not be used to release non-memory resources like file handles, sockets, database connections, etc because systems have only a finite number of these resources and you do not know when the Garbage Collection (i.e. GC) is going to kick in to release these non-memory resources through the finalize( ) method.

Q6. What is wrong with the following Java code?

A6. Above code is NOT thread-safe. This is explained in detail at

When working with Collection & Generics, you need to ask 4 important questions.

If you do the wrong thing, you will get “compile-time” errors. Also, note that you can’t use wildcards on the RHS when assigning and Java 8 supports empty “<>” on the RHS.

“?” is a wild card meaning anything. “? extends Pet” means “anything that extends a Pet”. Two key points to remember when using the wild card character “?” are:

Key point 1: you can add

When you are using wildcard List<? super Dog>, means assignable from anything of type Dog, or any superclasses of type Dog. You can add any subclasses of type Dog because of polymorphism where a parent type reference can hold its subclass types.

When you are using wildcard List<? extends Dog>, means assignable from anything of type Dog, or any subclasses of type Dog. This is read only, and can’t add anything to this collection.

1. Use the ? extends wildcard if you need to retrieve object from a data structure. That is read only. You can’t add elements to the collection.

2. Use the ? super wildcard if you need to add objects to a data structure.

3. If you need to do both things (i.e. read and add objects), don’t use any wildcard.

This happens at compile-time. This is also called compile-time polymorphism because the compiler must decide which method to run based on the data types of the arguments. If the compiler were to compile the statement:

it could see that the argument was a “string” literal, and generates byte code that called method #1.

it could see that the argument was an “int”, and generates byte code that called method #2.

Overloading lets you define the same operation in different ways for different data.

This happens at runtime. This is also called runtime polymorphism because the compiler does not and cannot know which method to call. Instead, the JVM must make the determination while the code is running.

The compiler would not know whether the input argument ‘reference‘ is of type “A” or type “B”. This must be determined during runtime whether to call method #3 or method #4 depending on what type of object (i.e. instance of Class A or instance of Class B) is assigned to the input variable “reference”.

Q. Are overriding & polymorphism applicable static methods as well?
A. No. If you try to override a static method, it is known as hiding or shadowing.

Core Java Interview Questions & answers will not be complete without Class Loaders.

Dynamic loading is a technique for programmatically invoking the functions of a classloader at runtime. Let us look at how to load classes dynamically.

The above static method “forName” & the below instance (i.e. non-static method) “loadClass”

return the class object associated with the class name.Once the class is dynamically loaded the following method returns an instance of the loaded class. It’s just like creating a class object with no arguments.

Q. What is the difference between the following approaches?

— Uses the “supplied class loader”, and initializes the class lazily (i.e. on first use). So, if you use this way to load a JDBC driver, it won’t get registered, and you won’t be able to use JDBC.

The “java.lang.API” has a method signature that takes a boolean flag indicating whether to initialize the class on loading or not, and a class loader reference.

is same as invoking

Q. What are the different ways to create a “ClassLoader” object?
A.

Q. How to load property file from classpath?
A. getResourceAsStream() is the method of java.lang.Class. This method finds the resource by implicitly delegating to this object’s class loader.

Note: “Try with AutoCloseable resources” syntax introduced with Java 7 is used above.

Q. What is the benefit of loading a property file from classpath?
A. It is portable as your file is relative to the classpath. You can deploy the “jar” file containing your “myapp.properties” file to any location where the JVM is.

Loading it from outside the classpath is NOT portable

As the above code is NOT portable, you must document very clearly in the installation or deployment document as to where the .properties file is loaded from because if you deploy your “jar” file to another location, it might not already have the path “myapp” configured.

So, loading it via the application classpath is recommended as it is a portable solution.

Q. What tips would you give to someone who is experiencing a class loading or “Class Not Found” exception?
A. “ClassNotFoundException” could be quite tricky to troubleshoot. When you get a ClassNotFoundException, it means the JVM has traversed the entire classpath and not found the class you’ve attempted to reference.