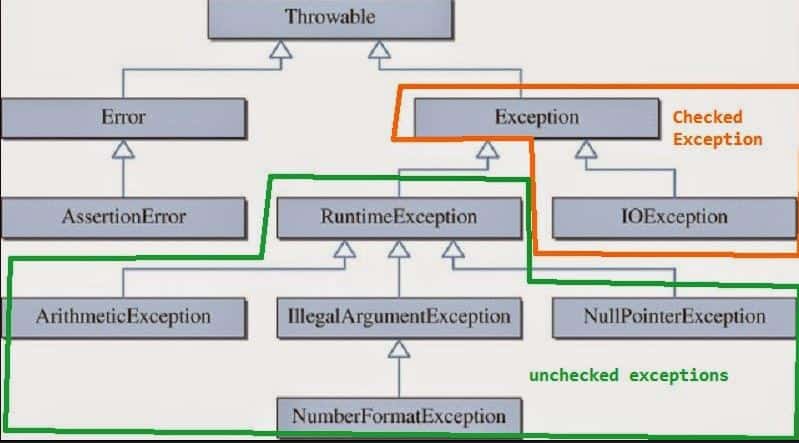 Q2. What is the problem or benefit of catching or throwing type “java.lang.Exception”?
A2. Exceptions are polymorphic in nature., which means you need to catch a more specific ones before the generic ones. For example, IOException must be caught before Exception as the IOException extends Exception. If you catch the Exception before IOException, then IOException catch block will never be reached as Exception catches everything.

So, it is wrong to catch Exception before IOException.

Fix this by catching the more specific IOException first

In Java 7 on wards, you can catch multiple exceptions like

Q4. What are the different ways to look at the trace of your program execution?
A4. Java is a stack based language, and the program execution is pushed and popped out of a stack. When a method is entered into, it is pushed into a stack, and when that method invokes many other methods, they are pushed into the stack in the order in which they are executed. As each method completes its execution, they are popped out of the stack in the LIFO order. Say methodA( ) invoked methodB( ), and methodB( ) invoked methodC ( ), when execution of methodC( ) is completed, it is popped out first, and then followed by methodB( ) and then methodA( ). When an exception is thrown at any point, a stack trace is printed for you to be able to find where the issue is.

A Java developer can access a stack trace at any time. One way to do this is to call

You could get a stack trace of all the threads using the Java utilities such as jstack, JConsole or by sending a kill -quit signal (on a Posix operating system) or

Q5. How would you go about analyzing stack traces correctly?
A5.

1. One of the most important concepts of correctly understanding a stack trace is to recognize that it lists the execution path in reverse chronological order from most recent operation to earliest operation. That is, it is LIFO.

2. The stack trace below is simple and it tells you that the root cause is a NullPointerException on ClassC line 16. So you look at the top most class.

3. The stack trace can get more complex with multiple “caused by” clauses, and in this case you usually look at the bottom most “caused by”. For example,

The root cause is the last “caused by”, which is a NullPointerException on ClassC line 16.

4. When you use plethora of third-party libraries like Spring, Hibernate, etc, your stack trace’s “caused by” can really grow and you need to look at the bottom most “caused by” that has the package relevant to you application like com.myapp.ClassC and skip library specific ones like org.hibernate.exception.*.