Q1. In which part of memory does Java Garbage Collection (i.e. GC) occur? When does the GC occur? In which thread does the GC run? Why is knowing about GC very important?
A1. Each time an object is created in Java, it goes into the area of memory known as heap. The Java heap is called the garbage collectable heap. 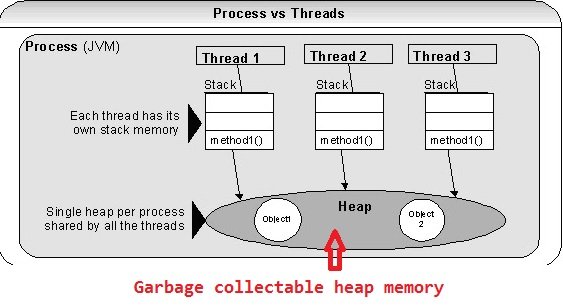 1) Developers can call System.gc() anywhere in their code to instruct the JVM to prioritize garbage collection. Another option is to use the Runtime.getRuntime().gc() call, but this invokes System.gc() behind the scenes.

2) Java Memory Map (jmap) utility that is shipped with JDK. If the JVM is busy and a GC cycle cannot be performed, an error will be thrown. Learn more at javap, jps, jmap, and jvisualvm tutorial – analyzing the heap histogram.

3) The Java diagnostic command (i.e. jcmd) is another JDK utility. If GC cannot be scheduled, it errors out.

4) JConsole is another JDK graphical UI utility discussed in more detail below. It has a button on its memory management page to run Garbage Collection. Learn more at: Monitoring/Profiling Java applications interview Q&As | JConsole for debugging deadlocks in Java | Exposing a Java class as a MXBean (or MBean) tutorial with jconsole.

This is what a heap memory space is divided into: Initially all new Java objects are stored in the Eden section. Most of these objects will then be destroyed at the next GC run because they are not used anymore. But some of them need to be kept because they have a longer lifetime and they will be used in the future. Therefore they are moved into the Survivor bucket. In the Survivor bucket GC calls are less frequent than in the Eden bucket. These two buckets represent the Young generation and contains all the “newly created” objects. If objects stored in Survivor buckets, survive to other GC visits they are then moved into the Tenured generation (or Old generation) bucket until they are destroyed by the Garbage Collector.

It is vital to know about GC as one of the main reasons for performance & latency issues in Java is due to JVM spending more time performing garbage collection. This can happen due to

2) Heap size is too small (use -Xmx). The application footprint is larger than the allocated heap size.

3) Wrong use of libraries taking up lots of the heap space. For example, XML based report generation using DOM parser as opposed to StAX for large reports generated concurrently by multiple users. DOM is very memory hungry.

4) Incorrectly creating and discarding objects without astutely reusing them with a flyweight design pattern.

6) Any explicit System.gc( ) from your application or third party modules.

Q. If I am a Data Engineer, do I have to know about GC?
A. The answer is YES if you use any technologies/fraeworks like Apache Spark, Kafka, etc that are JVM (i.e. Java Virtual Machine – aka Java Process) based. Apache Spark is written in Scala that runs on JVM. Even PySpark converts the Python code to byte code to run on JVM. Apache Kafka is written in Scala & Java. Q3. What is the difference between a weak reference and a soft reference? Which one would you use for caching?
A3. A Weak reference, simply put, is a reference that isn’t strong enough to force an object to remain in memory. Weak references allow you to leverage the garbage collector’s ability to determine reachability for you, so you don’t have to do it yourself. You create a weak reference like this:

A weak reference is a holder for a reference to an object, called the referent. Weak references and weak collections are powerful tools for heap management, allowing the application to use a more sophisticated notion of reachability, rather than the “all or nothing” reachability offered by ordinary (i.e. strong) references.

A WeakHashMap stores the keys using WeakReference objects, which means that as soon as the key is not referenced from somewhere else in your program, the entry may be removed and is available for garbage collection. One common use of WeakReferences and WeakHashMaps in particular is for adding properties to objects. If the objects you are adding properties to tend to get destroyed and created a lot, you can end up with a lot of old objects in your map taking up a lot of memory. If you use a WeakHashMap instead the objects will leave your map as soon as they are no longer used by the rest of your program, which is the desired behavior.

Soft reference is similar to a weak reference, except that it is less eager to throw away the object to which it refers. An object which is only weakly reachable will be discarded at the next garbage collection cycle, but an object which is softly reachable will generally stick around for a while as long as there is enough memory. Hence the soft references are good candidates for a cache.

The garbage collector may or may not reclaim a softly reachable object depending on how recently the object was created or accessed, but is required to clear all soft references before throwing an OutOfMemoryError.

Q4. If you have a circular reference of objects, but you no longer reference it from an execution thread, will this object be a potential candidate for garbage collection?
A4. Yes. Refer diagram below.

Memory leaks will prevent your application from being a true 24×7 by requiring it to be restarted every X number of days.

Q5. When you have automatic memory management in Java via GC, why do you still get memory leaks in Java?
A5. In Java, memory leak can occur due to

Q6. How will you go about creating a memory leak in Java?
A6. In Java, memory leaks are possible under a number of scenarios. Here is a typical example where hashCode( ) and equals( ) methods are not implemented for a custom Key class that is used to store key/value pairs in a HashMap. This will end up creating a large number of duplicate objects if you run in a large or endless while(true) loop for demonstration purpose. All memory leaks in Java end up with java.lang.OutOfMemoryError, and it is a matter of time before you get this error.

Q7. How will you fix the above memory leak?
A7. By providing proper implementation for the key class as shown below with the equals() and hashCode() methods.

Q8. In real applications, how do you know that you have a memory leak?
A8. If you profile your application, you can notice a graph like a saw tooth. Here is how you can determine this with the help of jconsole for the above bad key class example. All you have to to do is while your memory leaking application is running, get the Java process id by typing

Now, open up the jconsole as shown below on a command line VisualVM is a visual tool integrating several commandline JDK tools and lightweight profiling capabilities. Designed for both production and development time use, it further enhances the capability of monitoring and performance analysis for the Java SE platform. It is packaged as an exe file.

Step 1: You can start the visual vm by double clicking on %JAVA_HOME%/bin/jvisualvm.exe from Java 1.6 version onwards.

Step 2: Your local processes will be monitored under the local tab. The Visual vm can also used to open the heap dump files i.e *.hprof files to analyze the menory usages. You can find out the process ids of your local Java applications via

1. netstat -anp | grep 8088 or
2. In windows via the “Windows Task Manager” –> Processes tab. You need to click on View –> Select Columns and then “tick” PID (Process Identifier) check box.

Double click on the relevant PID in Visual VM console. You can add remote processes by following the steps shown below. Q9. What are the different types of Garbage Collectors?
A9. There 4 types.

3. CMS Garbage Collector – aka. Concurrent Mark Sweep. scan the heap memory to mark instances for eviction and then sweep the marked instances. Consumes more CPU for better throughput. “XX:+USeParNewGC” turns on the CMS.

4. G1 Garbage Collector – is used for large heap memory areas. It separates the heap memory into regions and does collection within them in parallel. It also compacts the free heap space after reclaiming the memory. Use JVM argument “–XX:+UseG1GC” for G1 GC. In Java 8, you can use an additional JVM argument “-XX:+UseStringDeduplication while using G1 garbage collector. This optimizes the heap memory by removing duplicate String values to a single char[] array.