According to Dice’s 2017 Salary Survey (PDF), those tech professionals who specialise in data warehousing, analytics, Big Data, low latency, and machine learning got paid big bucks for the past several years. 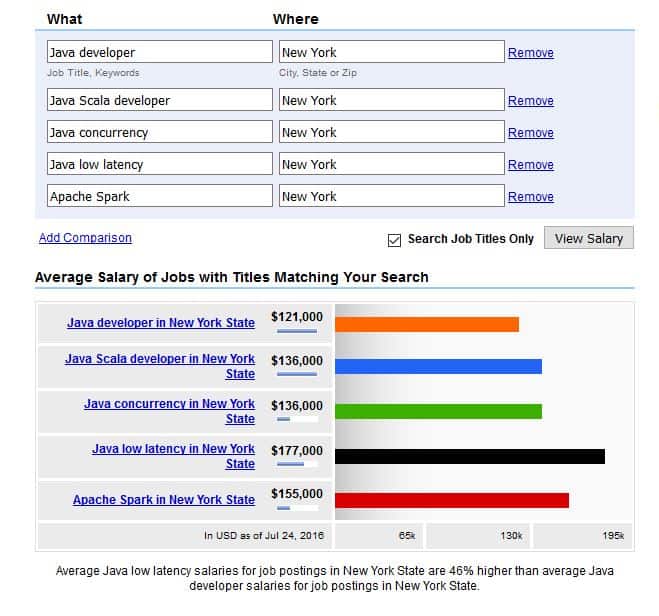 More and more organisations are complimenting their data warehouse systems like Teradata with Big Data platforms like Cloudera, AWS (i.e. Amazon Web Services) EMR, etc. It is easy to transition from being a Java/Scala/Python developer to a Big Data Engineer/Architect. Some of the hot topics to learn are Hadoop, Hive, Apache Spark, and NoSQL databases like HBase.

Search google for the keyword “Why low latency & Big Data are high income skills?“, and see the number of posts with salary estimates.

What specific skills are required?

In the race to secure the best salary in big data engineering & analytics jobs, a single skill development is not enough. Here are some of the skills apart from core Java, core Scala & SQL that will help you transition into a big data engineer/architect:

Q1. Why acquire skills & experience in low latency & Big Data?
A1. 10 years ago Spring & Hibernate were sought after skills, and now a days low latency and Big Data skills are more sought-after as modern applications need to deal with

#1 Response times in milliseconds as opposed to seconds.

#3 Server nodes in 100s with fault-tolerance as opposed to in tens. So be prepared to use terms like the application was deployed to “24 core 100 node cluster in AWS”, etc.

#4 Architectures are 1) highly distributed, 2) event-driven and 3) asynchronous with more complexities requiring good debugging skills. In event-driven architectures there is no single code logic that outlines overall behaviour. Debugging challenges include:

a) Out of order processing issues as events are streamed potentially in out of order from various event sources requiring additional logic.

b) Replay considerations as the master data in the HDFS (i.e. Hadoop Distributed File System) raw zone needs to be rerun in batch modes with renewed access patterns, business logic & rules. Append only systems (E.g. Big Data on HDFS) don’t update data models, but keep appending to the existing data & evaluate the current state by 1) deleting the current data models and 2) replaying the event logs (i.e. the master data). These jobs are run as batch jobs with eventual consistency. This is known as event-sourcing.

e) Race conditions, performance issues, and out-of-memory issues when dealing with larger volumes of immutable & append-only data logs that need to be replayed into memory or indexed data models for responsiveness & real-time querying.

#5 Deployments & partial service upgrades are more frequent as in once a day or week as opposed to once a month. Micro-services are conducive to frequent & independent upgrades. Some services can be deployed more frequently to more cluster nodes than other services. Deploying to cloud servers like AWS allows you to spin more nodes very quickly to adapt to increasing demand.

Q2. What key words & relevant experiences should you have in your resumes and bring up in your job interviews?
A2. It makes more sense to pay attention to key words like:

Distributed data storage (E.g. HDFS, AWS S3, etc), computing (E.g. Apache Spark), and messaging (E.g. Apache Kafka) systems with share nothing architecture will be running on 100+ nodes with each node having its own CPU, memory and I/O) and as demand increases more nodes can be added. This is also known as horizontal scaling.

In distributed systems (E.g. NoSQL databases like HBase, Cassandra, etc) the same piece of data is usually replicated to multiple machines to give fault tolerance & high availability. When you update that piece of information on one of the machines, it may take some time (usually milliseconds) to reach every machine that holds the replicated data. This creates the possibility that you might get information that hasn’t yet updated on the replica. In many scenarios, the this anomaly is acceptable. In scenarios where this type of behavior is not acceptable, the NoSQL databases may give the the choice, per transaction, whether data to be eventually consistent or strongly consistent.

During job interviews bring out these keywords, skills, and experience when responding to open-ended questions like what are some of your recent accomplishments that you are proud of, etc.

Q4. Why is streaming data in real-time equally important as batch processing?
A4. The reason for this is that processing big volumes of data has to be fast so that a firm can react to changing business conditions in real time.

Q5. Why is it necessary to know functional programming (i.e. FP) paradigm?
A5. FP compliments OOP, and can be more robust due to fewer moving parts and fewer or no mutable variables & hidden states if done properly. FP is widely used in Big data, especially in writing Apache Spark jobs in Scala, Python or Java.

1) FP is all about functions, and focuses on computational problems by evaluating functions to transform a collection of data by focusing on the composition and application of functions. For example, you apply “map”, “flatMap”, “reduceByKey”, “groupByKey”, etc to a collection of data.

2) FP favors immutability, which is in line with the modern event sourcing models that replay append only event logs to recompute current state.

3) FP shines in building concurrent applications. OOP languages cannot readily take advantage of multiple processors whereas pure functional programming can run two or more functions at once as functions are not altering outside state.

4) Debugging & testing can be easier. Debugging is easier as pure functions depend only on their input parameters to produce their output. Testing is easier as you don’t have to worry about dealing with hidden state and side effects.

You can learn more about this at Transforming your thinking from OOP to FP, and where does FP shine?.