Q6. If you add a component to the CENTER of a border layout, which directions will the component stretch?
A6. The component will stretch both horizontally and vertically. It will occupy the whole space in the middle.

All the Swing components start with ‘J’. The hierarchy diagram is shown below. JComponent is the base class. Q9. What do you understand by MVC as used in a JTable?
A9. MVC stands for Model View Controller architecture. Swing “J” components (e.g. JTable, JList, JTree etc) use a modified version of MVC. MVC separates a model (or data source) from a presentation and the logic that manages it.

Complex layouts can be simplified by using nested containers for example having panels within panels and each panel can use its own LayoutManager. It is also possible to write your own layout manager or use manual positioning of the GUI components. Note: Further reading on each LayoutManagers is recommended for Swing developers.

Design pattern: The AWT containers like panels, dialog boxes, windows etc do not perform the actual laying out of the components. They delegate the layout functionality to layout managers. The layout managers make use of the strategy design pattern, which encapsulates family of algorithms for laying out components in the containers. If a particular layout algorithm is required other than the default algorithm, an appropriate layout manager can be instantiated and plugged into the container. For example, panels by default use the FlowLayout but it can be changed by executing:

This enables the layout algorithms to vary independently from the containers that use them. This is one of the key benefits of the strategy pattern.

Q11. Explain the Swing delegation event model?
A11. In this model, the objects that receive user events notify the registered listeners of the user activity. In most cases the event receiver is a component. 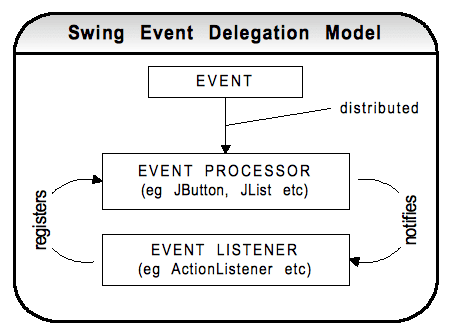